By JC Lockwood, Newburyport Arts JourntalRead the original here.Got so wrapped up in the Ensemble Epomeo’s program for “Music and the Manse” and our new appreciation for the Italian language, that we forgot to talk abut the new guy. And the old guy. But it turns out that the last time we saw Byron Wallis — during Ensemble Epomeo’s Port debut last year, when the trio rolled out, among other things, a magical performance of Schnitke’s String Trio, the piece that brought the group together in the first place — will likely be the last time we ever see him. The Paris-based violinist is no longer performing with Epomeo. He’s been replaced by Carolyn Chin, a rising classical star who with a packed resume that includes leading the conductorless String Orchestra of New York City, performing as concertmaster with the Paragon Orchestra and touring the United States and Japan with the tap dancer Savion Glover.No, there’s nothing particularly nasty going on. Just the usual “creative differences,” which often, just below the surface, are about personalities, plus the fact that working with someone who lives and performs thousands of miles away from the Center of the Universe — that would be New York — makes the whole trio thing just a little too complicated. Wallis, who frequently performs with the Orchestre Nationale d’lle de France, “is a terrific guy, one of the sweetest and gentlest guys I know,” says Epomeo violist David Yang. “We just had different approaches. We are still good friends so I think I can say the parting was mostly mutual”Yang, who is also artistic director of the Newburyport Chamber Music Festival, performed with Chin a couple of years ago at the Norfolk Chamber Music Festival, always liked her and her playing. “In addition to being a truly impressive musician with outrageous chops she is also an unusually honest person, and that is important,” says Yang. “She has a core of steel, too. By this I mean she is a real leader — a strong personality in the group. A trio is so small that everyone needs to hold their weight, but even in the more democratic form of a trio (versus string quartets, in general) you need a violin who likes to lead. So personality is really important. I mean, look, we just spent two weeks together rehearsing, I kid you not, eight hours a day. You think that is going to work for very long if we don’t know how to get along? You don’t have to like one another, but you have to respect one another. We have had disagreements, but the amazing thing is how non-personal it is.“The stakes, while they may seem small outside, can feel enormous in a group,” says Yang. “Differences in interpretation, in pitch, timing. A small disagreement can feel very personal – can you play that note a little higher? No, why would you want that? It sounds terrible? Well I think your way sounds terrible? Who are you calling terrible? How dare you? And so on. It is important to me to play with people I admire as players and also as people.”Epomeo, which also includes Kenneth Woods, founder of the Taliesin Trio and the Masala String Quartet as well as principal guest conductor of the Stratford-upon-Avon-based Orchestra of the Swan, takes its name from the non-active volcano that dominates the landscape of the small, sun-drenched Italian island of Ischia, where the trio is currently holed up. The group is the resident ensemble of the island’s Festivale d’alla Musica da Camera d’Ischia‚ a 10-day chamber music festival and intensive study retreat. They’ll have little time, just four days, between Ischia and the Port performance, which, itself, is part of the Newburyport Preservation Trust’s weeklong festival. The program will include “Thrice blest,” a world premiere by Kile Smith that is based on music by 17th-century Newbury composer John Tufts that came from a hymnbook discovered by NCMF executive director Jane Niebling. Also on the program will be the Sitkovetsky transcription of Bach’s Goldberg Variations for string quartet and Beethoven’s String Trio in D major, which Yang says is the “core” of the program for the trio.JUST THE FACTS, MAN: Ensemble Epomeo will perform at “Music and the Manse,” a benefit for the Newburyport Preservation Trust, May 21 at the 18th-century Henry C. Learned House, 190 High St., Newburyport. The program includes the Sitkovetsky transcription of Bach’s Goldberg Variations, Beethoven’s String Trio in D Major and “Thrice blest,” a world premiere based on music by West Newbury composer John Tufts. The event, which runs from 5:30 to 9 p.m., also includes a tour of the historic home and a wine and hors d’oeuvres reception. Tickets are $75. Reservations are required. For more information, call 978.463.9776. 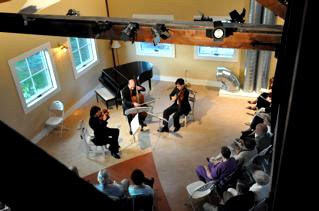 It may not have been exactly what organizers had envisioned. Okay, it definitely wasn’t: A fundraiser that doesn’t rake in the dough wasn’t what all the meetings and all the strategy sessions were about. But it’s hard to believe anyone felt less than sigh-and-snuggle-before-rolling-over-and-lighting-up-a-smoke satisfied after the Trio Epomeo’s June 6 performance for the Newburyport Chamber Music Festival. Except, perhaps, for the Schnittke fans, who, once they got a taste of the Moderato section of the Russian composer’s String started growling for the Adagio — a kind of musical blood lust. But it was not to be. A last-minute adjustment of the program had the trio — violinist Byron Wallis, cellist Kenneth Woods and violist David Yang, who is also NCMF artistic director— jettisoned the Adagio to make room for Beethoven’s Trio in C minor, Opus 9, in its entirety. The program had originally called for closing with just a taste of the Maestro, playing the Rondo and calling it a night.Was it a good trade-off? Opinions vary, even among Schnittke fans. The Newburyport performance, the penultimate stop of Trio Epomeo’s three-country, two-continent tour, had been conceived as musical tapas, of sorts, giving the audience a taster’s menu, a variety of works to sample, a selection of moods and colors, rather than complete works. But, even within this context, the emphasis was on the modern, and the mood tilted toward darker hues: Hans Krasa’s chilling “Tanz,” which opens with a waltz and ends with oblivion; Alan Hovhaness’ ethereal, otherworldly Trio, the musical manifestation of a deep, mournful sadness that seems to exist on a cellular level; Gideon Klein’s “Based on a Moravian Theme,” a concise and unforgettable emotional musical rollercoaster; and, finally, closing the first half of the performance with Schnittke’s alternately lulling and jolting crash-bang String Trio.Within this context, the Beethoven seems a little out of place historically, musically and even geographically, given that the work presented had an eastern Europe perspective — even the encore, a Kodaly Intermezzo. At the same time, it was comforting, steadying, closing with Beethoven, a lovely piece — lyrical, expressive, an incredible vehicle for exploring possibilities of the instruments. And, again, when you encounter such inspired playing —wonderfully executed and, at times, absolutely breathtaking performances by players at the top of their game, up close and personal— all this talk about the what’s what of the program becomes mere sport. So, again, within this context, the decision to go Ludwig becomes a fielder’s choice.It was a magical evening — seriously under attended, but magical. The trio, which came together last year at the Festivale d’alla Musica da Camera d’Ischia in Italy to explore the possibilities of just one piece (the Schnittke Trio, natch) and discovered that they clicked musically, sounded like they had been playing together forever. The performance space (the Carriage House, a marvelous listening room fashioned out of an 19th-century out-building on the Lord Timothy Dexter Estate by NCMF patrons Julia Farwell Clay and Walter Clay) is a delight, as was the after-party — the social aspect, the schmooze, has been an important part of festival since its inception. There was plenty of food and wine and a chance to chat up musicians. We heard stories about Wallis’ recent tour of North Korea, of all places. Or the time when he and Wood, who worked together during a musical interlude in Arkansas, wandered into a rock and roll club. Wallis kind of hung back, but Woods, who performed in a rock band back in his Indiana University days, jammed with the band, playing guitar behind his head, a la Jimi Hendrix. But the best news we got, before the last of the wine had been poured, was that trio plans to record the Schnitkke. Stay tuned!